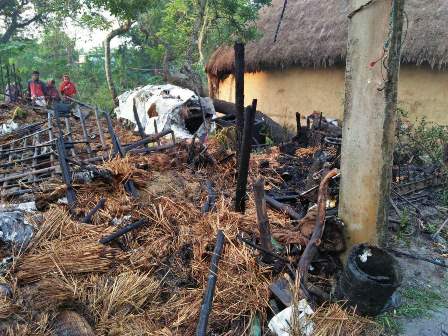 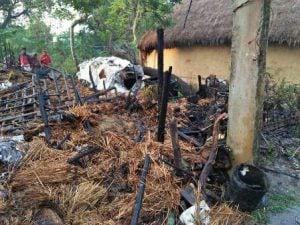 Bhadrak: At least six houses were reduced to ashes and property worth lakhs gutted in a major fire breakout at Sandhagada village under Bazarpur panchayat area in the district last night.

The incident took place late in the night while all were asleep in the village. Flames engulfed houses of Laxmidhar Behera, Gangadhar Behera, and Surendra Behera in the village first and later spread to other houses. Furniture, important documents and other valuable items of at least six households, worth lakhs were reduced to ashes before locals could do anything to douse the fire.

The flames were brought under control only after Gadi Fire Brigade team rushed to the spot getting intimation by locals later in the night and intervened.

Chandabali Police have reached the spot and started investigation to find out the exact cause of the fire breakout.