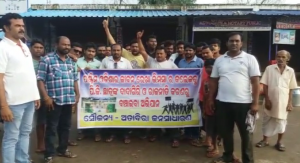 Bargarh : In an unprecedented move, the people of Attabria town in Bargarh district have called a 6-hour bandh in the town on Wednesday in support of the Director of Veer Surendra Sai Institute of Medical Sciences and Research (VIMSAR) , Burla, Aswini Kumar Pujahari in the wake of the unrest in the campus triggered by a ceasework by PG students to protest what they call the high-handedness of the Director.

Vehicular communication came to a standstill as the protesters blocked all roads connecting this town. Besides, all the government offices, educational institutions, shops and other business establishments remained closed in the town.

Pujhari came to the limelight when he caught Assistant Professor of Orthopedic Department of VIMSAR, Goutam Kumar Satpathy in a sting operation while the latter was attending to patients privately at his residence during duty hours. Satpathy was later suspended for his indiscretion.

However, the premier government referral hospital in western Odisha has been in turmoil since Saturday and health services have been affected due to the on-going fight between PG students and the Director.

Meanwhile, the state government has appointed as many as 116 doctors in VIMSAR on a temporary basis in an effort to restore normal health services.