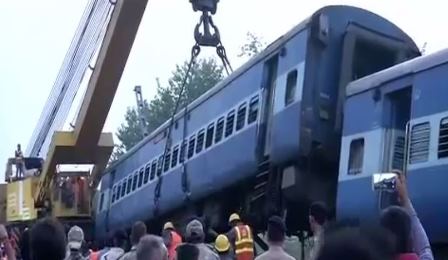 Bhubaneswar: A five-member team from Odisha on Sunday left for Khatauli in Muzaffarnagar district of Uttar Pradesh to take stock of the situation and conduct an investigation at the spot where 14 coaches of Puri- Haridwar Kalinga Utkal Express (18477) derailed leaving 21 dead and over 100 injured yesterday evening.

Odisha Government has constituted the team under the leadership of State Commerce and Transport Minister Nrusingha Sahoo.

Rajya Sabha member Pratap Deb, Parsuram Dhada, Muktikanta Mandal and Sukant Naik are the other members of the team that will oversee measures to be taken in case of the death of any residents from Odisha in the train mishap.

A team of Odisha BJP under the leadership of MLA Rabi Nayak met the injured persons at the hospital and took stock of the situation.

Although the exact reason behind the derailment of the train is yet to be confirmed, the state government has declared compensation for Odia victims of the mishap.

Odisha Chief Minister Naveen Patnaik had announced Rs 5 lakh ex-gratia to the kin of persons killed in accident and Rs 50,000 financial assistance for the injured. However, Indian Railways has confirmed that there were no Odias among the deceased passengers.

Three passengers from the state were, however, injured in the train mishap. They were identified as Madhu Mandal, Mubarak Ali and Sabita Mallick.

As many as 99 people had boarded the train from various stations in Odisha.