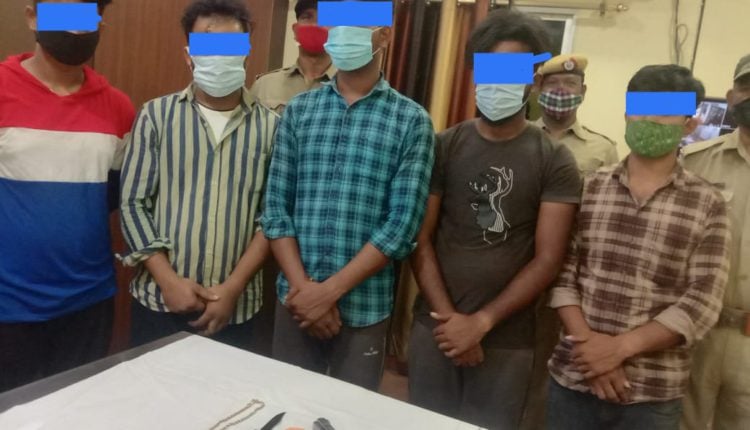 Berhampur: As many as five persons were arrested on Wednesday in the group clash case that took place under Digapahandi Police limits in Ganjam district of Odisha on September 10.

The arrested persons have been identified as Ganesh Dora (24), Susanta Kumar Sahu (25), S. Milan Dora (24), R. Susanta Dora (26) and Kureshu Sethi. All of them are of village Dengaosta P.S- Patapur in Ganjam district.

At least five persons had been injured in the group clash while the accused persons assaulted each other with lathi, iron rod, sharp cutting weapons and country made Auto pistol.

As per reports, on September 10, at about 7.30 PM in the night violent clash broke out between two groups of Dengaosta in Patapur area under Digapahandi Police limits. The clash left 5 persons injured. The clash started suddenly while the persons involved assaulted each other by means of Lathi, Iron rod , sharp cutting knife  and country made Auto Pistol  on  NH-326 at Digapahandi- Podamari road near GRIDCO Electric office.

During investigation, the above noted 5 accused persons have been identified and other 4-5 are still absconding.

One Country made Pistol with Two rounds live ammunition, one sharp cutting knife, one blood stained silver chain, and five Motor cycles have been seized in this case.

The five accused persons were arrested and forwarded to the Court today after observing all formalities. The investigation of the case is under progress.

Tata XPRES-T EV launched in India, can be charged up to 80 per cent in 90 min

Petrol, Diesel price might drop down to Rs 75 per litre and Rs 68 per litre respectively