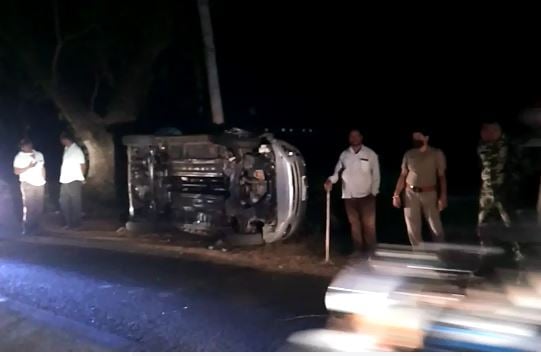 Puri: At least five persons sustained severe injury after the car, on which they were travelling, turned turtle following a series of accidents on the Puri-Satapada National Highway in Puri district of Odisha on Wednesday. The tourist vehicle was returning from Satapada.

As per reports, a few tourists had visited the Gabakunda of Chilika lake near Satapada. When they were returning their car hit other vehicles first at Brahmagiri Bazar, then College Chowk and then at Aredi.

After the three accidents driver of the car lost balance on the steering and the vehicle turned turtle at the Kerandia chowk. The locals rushed to the spot and rescued the injured persons. They were first sent to the Rebana-Nuagaon Community Health Centre. As their health condition deteriorated, they were shifted to Head Quarter Hospital, Puri.

After getting information, Police reached the spot and seized the vehicle. Driver of the tourist car has been detained and further investigation is going on.

Big B ‘features’ in Aditya Narayan’s wedding video in a quirky way: Watch