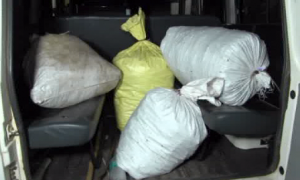 Bolangir: Excise officials seized 46 kg ganja and arrested four persons after conducting a raid at Bhadrapalli village under Puintala police limits in the district on Friday.

The arrested persons have been identified as Sankirtan Kheti, Rama Kheti, Babru Kheti and Kumpadar Kheti.

The excise officials conducted the raid this afternoon after getting a tip off on the gaja deal which was taking place at Sankirtan Kheti’s home. Puintala Police assisted in the raid.

The seized ganja would cost lakhs said the excise officials.