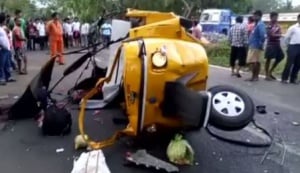 Bhubaneswar: Road accidents in Odisha have claimed 4463 lives last year, a report released by Traffic Research Wing of Ministry of Road Transport and Highways has revealed.

Deaths due to road accidents in the State have shown an increasing trend in the last three years. While the number of road fatalities in 2015 stood at 4303, 3931 deaths occurred in 2014.

With 11312 injuries this year, Odisha features among the top 13 states in the country in the category. The number of accidents stood at 10532.

The report, which was released by Union Minister of Road Transport and Highways Nitin Gadkari, also revealed that an average of 17 fatalities are reported in the country every hour. While Uttar Pradesh topped the list of states with highest fatalities due to road accidents at 19,320, Tamil Nadu reported the highest number of accidents with 71,431 accidents.

However, the overall figures reveal that the number of injured and number of deaths due to road accidents declined last year in comparison to 2015 by 4.1 per cent.