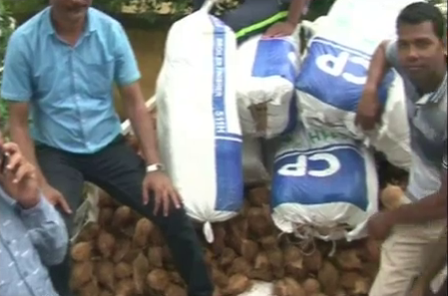 Malkangiri: Unearthing the flourishing ganja trade in the district, excise sleuths seized a coconut laden vehicle in Kudumuluguma block here on Thursday and seized around four quintals of the banned drug being transported on it. Two persons were taken into custody in the incident.

Reports say Malkangiri district excise officials got a tip-off on a ganja laden Bolero Pick Up van near Gopalpur area this morning and immediately chased the vehicle. After intercepting the vehicle at Jabagad area, the officials seized several packets of ganja from it. The banned drug was very discreetly kept hidden inside the coconut bags. The driver and the helper of the vehicle were taken into custody by excise officials following the raid.

The seized ganja would be worth around Rs 25 lakh, Excise sources said.

“We got a tip-off today morning that a huge amount of ganja was being transported on a coconut-laden vehicle from Chitrakonda area of Malkangiri to Angul district. We chased the vehicle immediately and intercepted it at Jabagad near Gopalpur under Kudumuluguma block and seized the ganja packets,” said Ashok Kumar Sethi, Excise Superintendent, Malkangiri.

“The driver and the helper of the vehicle were taken into custody and their interrogation is on to gather more information on the drug trade,” he added.