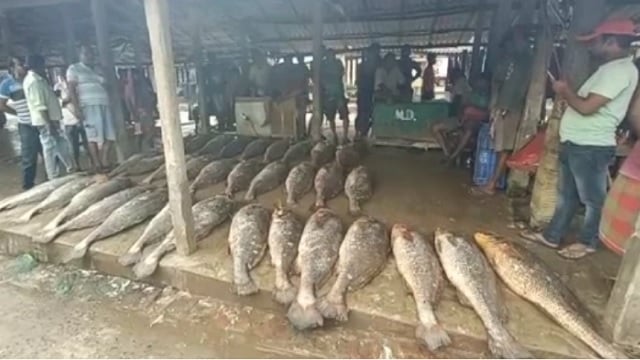 The locals of the area gathered near the sea to witness the huge rare catch. The huge rare telia bhola fishes, weighing about 84 kgs, were immediately brought to the open market for auction purpose.

A pharmaceutical company in Kolkata bought 33 fish for Rs 1 crore during the auction in the market, added reports.

Earlier on Tuesday, a team of five fishermen trapped a telia bhola fish weighing over 78 kgs from a bay linked to Kapura river on the coast of Odisha in the Sundarbans of South 24-Parganas in West Bengal.

The gigantic telia bhola fish was 7 feet long and weighs 78 kgs 400 grams. The locals of the area gathered in the area to witness the huge rare catch. The fish was later taken to the Canning wholesale market for auction where the gigantic fish was finally sold at a price more than Rs 36,53,605 at the auction.

As per a fish exporter, the Telia Bhola fish has immense medicinal value.

Also read: What a catch! Gigantic fish weighing 78.4 kgs caught off the coast of Odisha