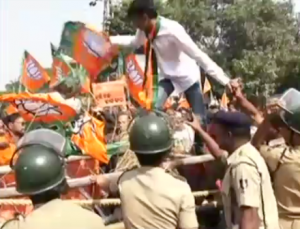 The BJP Krushak Morcha, the farmers’ wing of the party held a rally called ‘Sachivalaya Chala’ from its state headquarters in the city to the Secretariat over demands like waving of farm loans, a bonus of Rs 100 per quintal for farmers on paddy MSP and identification of sharecroppers in the state. However, a scuffle erupted between the policemen deployed on duty and the Morcha activists near Rabindra Mandap after the latter tried to head towards Secretariat breaking the barricades.

Several BJP activists including some women sustained injuries in the scuffle and police arrested at least 30 of them from the spot.

Later, the activists staged a dharna on the spot protesting police excess and CM’s unwillingness to meet them over farmers’ issues. Other senior leaders of the BJP state unit like Kanak Bardhan Singhdeo, Sameer Mohanty, Bhrugu Buxipatra and Prithviraj Harichandan were also present during the protest.

“The rally was BJP’s effort to draw the attention of the Odisha Government towards farmers’ sorrow in the state and awake them from deep slumber. However, the CM chose not to meet us and used police excess on the activists. It is extremely unfortunate and condemnable. Naveen Patnaik can’t stifle the voice of democracy”, said Basant Panda in his reaction after the rally.

“The State Government has turned anti-farmer,” alleged the saffron leader.