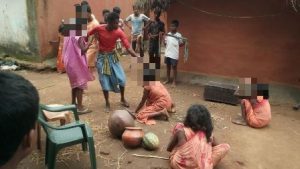 Nabarangpur: In yet another witchcraft-related incident in the state, three alleged sorceresses were thrashed brutally by locals in Sindhiguda village under Papadahandi block in Nabarangpur district on Wednesday for allegedly harming a family through witchcraft.

Reports say tension gripped Sindhiguda village after a resident Gobardhan Gouda’s family hired three women sorceresses to hold a ‘puja’ at his home this morning. The family took the unscientific step following a suggestion by a village quack to cure several of its members from prolonged illness. However, a number of members apparently fell sick and lost their mental equilibrium following the act of sorcery.

Hundreds of villagers gathered to detain the alleged sorceress trio following the incident and thrashed them brutally holding them responsible for the trouble.

Papadahandi Police reached the spot and arrested Tulsi Gouda, Kamala Gouda and Harabati Gouda—the sorceress trio–along with Nila Gouda, member of the family which had hired them.