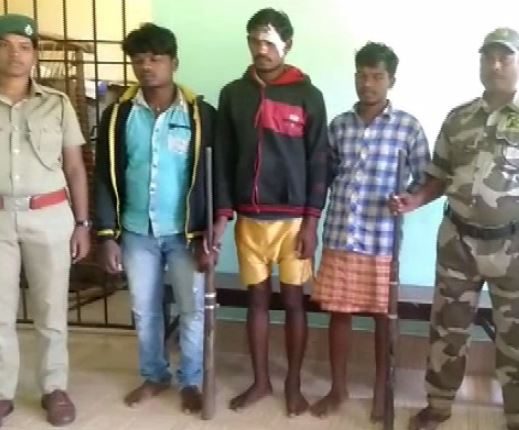 Balasore: In a major success to forest department officials against poachers on the prowl in the district, they arrested a three-member gang by conducting a raid in Oupada Forest Range last night.

The held poachers have been identified as Ajay Nayak, Baguni Nayak and Sagar Singh.

The raid was conducted at around 2 am in the night post the direction of Oupada Forest Ranger Babita Soren.

A joint team of forest officials from Bagha Ampuda and Danto beat houses also took part in the raid which triggered a fight with the poachers. The accused trio was nabbed subsequently.

At least two guns were seized from the possession of the held poachers.

The arrested trio will be forwarded to court today and similar raids will continue in the coming days, said the Ranger.

Also Read: Jumbo Electrocuted After Tumbling Over Trap For Wild Boars In Sambalpur

Jumbo electrocuted after tumbling over trap for wild boars in Sambalpur