3 of family among 4 killed in Highway mishap 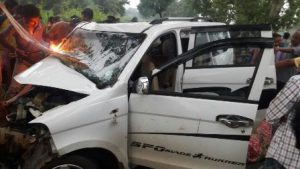 Sambalpur: In a tragic highway crash, four persons, including three members of a family and the driver, were killed as the SUV carrying them hit a roadside tree near Kadhemura area under Dhama police limits on Wednesday night.

The incident occurred in the wee hours of Thursday while the family of Gopinath Kissan’s family of Kashipur village was on its way to a relative’s house at Ghansara village under Gadaposha panchayat of the district to celebrate ‘Nuakhai’ festival. It is said that the driver of the Chevrolet Enjoy (Registration Number OD 33 L 1931) the family was aboard felt drowsy and lost control over the wheels of the vehicle smacking it into a road side tree on Sonepur-Sambalpur NH near Kadhemura area. The impact of the accident was so severe that the vehicle got completely mangled.

Three members of the family, Gopinath’s wife Tapaswini Kissan, one and a half year old son Gyananda Kissan, sister-in-law Binapani Kissan and driver Sanjay Matangi died on the spot. Gopinath and another driver Madan who was present inside the vehicle sustained critical injuries in the accident.

The injured were later shifted to Sambalpur District Headquarters Hospital by the police after it extricated them from the mangled vehicle with the help of a gas cutter.