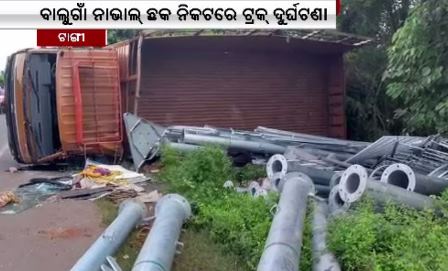 Khurda: At least three persons were killed and three others were severely injured after the truck in which they were travelling overturned on National Highway-16 near Naval Chhak in Balugaon on Wednesday.

Soon, police and fire personnel rushed to the spot and sent the bodies for postmortem.

The injured were initially admitted at Balugaon hospital but were later shifted to a hospital in Bhubaneswar as their condition deteriorated.

Though police is yet to ascertain the cause behind the accident, it is assumed that the driver lost control over the pipe-laden vehicle following which it overturned.

The whereabouts of the victims are also yet to be known.