3 critical in Bolero-truck head on collision 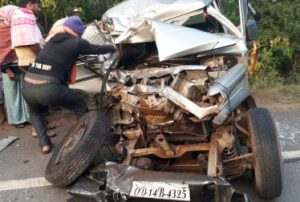 Kamakhyanagar: At least three persons sustained critical injury after a Bolero carrying collided head on with a fruits laden truck at Ghagaramunda Square on NH 149 under Parjang police limits in Dhenkanal district today.

While the injured could not have been identified yet, they all are believed to be from Parjang area.

The mishap took place early in the morning today while the ill-fated Bolero was on its way to Khamar village from Pitiri area with three passengers on board. The vehicle was struck from the front by a speeding fruits truck coming from Rourkela. The impact was so serious that the Bolero got completely mangled leaving all the passengers critical on the spot.

The critical were rushed to the Talcher Sub Divisional hospital by Parjang police who reached the spot later in the morning. While the driver of the truck managed to flee the spot police have seized both the vehicles from the spot and started investigation.