2nd year medicos on strike at MKCG over ragging 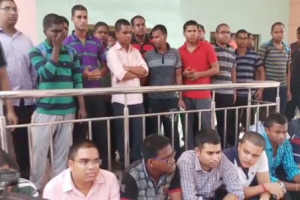 Berhampur: Tension gripped the MKCG Medical College and Hospital in the city on Saturday night after a group of second year medical students staged a sit-in protest before the college office alleging ragging in the hands of seniors.

The sit-in was held after a group of final year medical students reportedly barged into the newly constructed hostel of second year students last evening and thrashed the juniors brutally. Some of the students even sustained injury in the attack.

“Our hair was snipped by the seniors who made us to stand for long hours as part of ragging on the intervening night,” said an agitating student while speaking to media at the sit-in venue.

However, after being contacted over the issue, the principal of the Medical College has assured that the next course of action would be decided after a meeting with the agitating students.