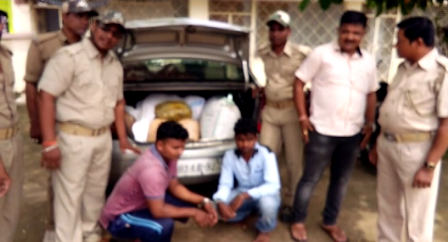 Berhampur: Sorada excise department sleuths seized a ganja-laden car in Nuagaon area on Tuesday and recovered 25 kg of the stuff from inside the car. Two persons were also taken into custody during the raid.

The arrested duo have been identified as Sameer Digal and Rajan Digal.

Soon after the Sorada excise department got a tip-off on ganja being transported in a Renault car from Baliguda to Bhubaneswar this morning, a team of excise officials, led by Inspector Asraful and Sub-Inspector Niranjan Rout, first put up a blockade at the Sorada Forest Gate to intercept the vehicle. However, the car carrying ganja managed to give them a slip and passed through the gate breaking the blockade. It was, however, later caught by the excise officials at Nuagaon Forest Gate where it again put up a blockade by keeping boulders on the road. Packs of ganja were seized from the car and two on board were taken into custody.

The seized gaja would cost around Rs 2 lac, informed the excise department sources.