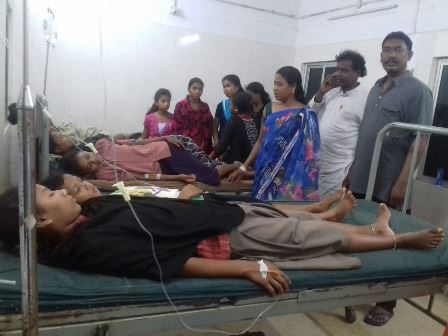 Bhawanipatna/Paralakhemundi: The Mid-day Meal (MDM) programme in Odisha comes under the scanner again, as around 200 students fell sick in Kalahandi and Gajapati districts on Thursday after taking lunch at school.

In the first incident, around 80 students of schools located at Luma, Duri and Bandhapari taken ill following consumption of lunch. They reported symptoms like head reeling, nausea, and vomiting. Two of the victims also turned critical following the incident. The school authorities shifted the affected students immediately to the Biswanathpur Hospital and the critical duo was shifted to VIMSAR later in the day.

The Sub-collector and Tehsildar reached the hospital and took stock of the situation. They also assured stringent action against the Lanjigarh based Mana Trust which has supplied the meal.

In another incident, more than hundred students of Badakalabat Ashram School in Gumma block fell sick after consuming MDM same day. They were rushed to Paralakhemundi Hospital by the school authorities.

Students have complained that the dal served in the MDM was of sub-standard and smelling bad, which could have been the cause behind their sickness.