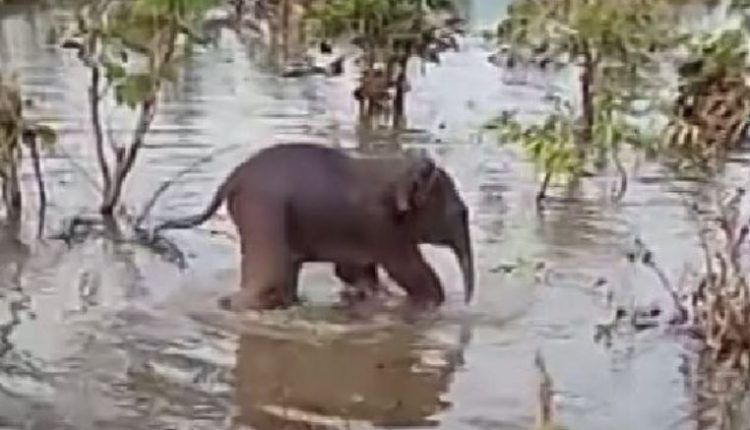 Athmallik: A two month old elephant calf was rescued in Angul district of Odisha on Monday. The baby elephant was rescued in the Raniakata area that is located in between the Handapa Range and Bamur range of Athmallik Forest division in the district.

According to reports, in the wee hours of the day on Monday a herd of elephant had come from the Madhapur area. When the herd was crossing the upper catchment area of the Manjore Irrigation Project, the said elephant calf trapped inside water after getting separated from the herd.

After witnessing that the elephant calf was trapped, the locals tried to rescue it but as they could not do so, intimated the Forest Department. The Forest officials reached the spot and rescued the male elephant calf with the help of the locals. Later the calf was released into the Rohila Reserve forest.

It is to be noted that lately another elephant had been trapped inside the Mahanadi water at the Mundali barrage of Cuttack district. The ODRAF team along with senior journalist Arindam Das and cameraman Prabhat Sinha were also on the rubber boat. However, the boat met an accident and Das was killed. His body was later fished out from the River water. An ODRAF jawan also was killed in this incident. Thankfully the camera person was rescued and he was discharged from SCB Medical today. The other rescued jawans of ODRAF are undergoing treatment at the Medical.