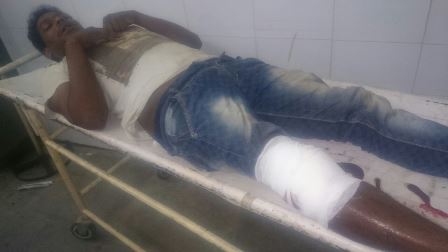 Berhampur/Cuttack: Continuing with its campaign against the history-sheeters in the state, police arrested two criminals after separate encounters carried out in Ganjam and Cuttack districts on Monday night.

While Kisan Patra was nabbed following a gun battle with Ganjam police late yesterday night in Aska, Kalandi Khuntia was captured by Commissinerate Police following an encounter at Rajabagicha area in Cuttack city.

Following a tip-off on Kisan’s presence near Charimile square in Aska along with an aide, the special squad of Ganjam Police rushed to the spot late yesterday night. However, finding police on the spot Kissan opened fire at them and tried to escape. He sustained bullet injury on his right leg in return fire by the police and was nabbed subsequently. Police rushed Kisan to Aska Hospital first and then shifted MKCG Medical as his condition was deteriorated. However, the aide of Kisan managed to give police a slip.

Mousers, live bullets and a bike were seized from the possession of the arrested criminal.

Kisan has around 6 cases pending against him at different police stations in Ganjam, Police confirmed.

Similarly, Kalandi Khuntia an accused in series bomb hurling incident in Badambadi area in Cuttack was chased by a special squad of Commissionerate Police in the Sweeper Colony of Rajabgicha area of the city last night. Kalandi retaliated with firing and sustained bullet injury on his right leg in return fire by the police. He was nabbed by police following the injury and was rushed to the SCB Medical in Cuttack.

Kalandi had two murder cases and one extortion case pending against him with the Commissionerate Police.