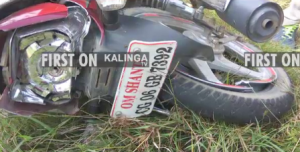 Bargarh: In a tragic road mishap, two school kids were killed and three others sustained severe injury on NH 26 near Luhurachati Square under Sohela police limits in the district, after a bike, carrying  them was struck by a truck from rear this morning.

The deceased have been identified as Anant Andija and Dayasagar Pradhan of Sri Aurobinda Integral Education Centre School, Sohela.

The incident took place early in the morning while at least four kids were being taken to the school by a bike by one Buddhadev Pradhan. Eyewitnesses said, the driver of a speeding truck coming from behind lost control over the wheels and mowed down the bike near Luhurichati toll gate. While Buddhadev along with two kids riding pillion sustained critical injury in the accident, Anant and Dayasagar died on the spot. The injured were shifted to Sohela Community Health Centre (CHC) by some locals later on.

Police have reached the spot and seized the bodies.