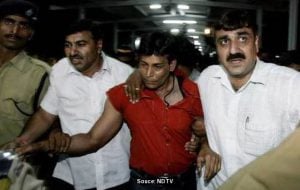 Mumbai:  A special Terrorist and Disruptive Activities (TADA) court here on Thursday sentenced gangsters Abu Salem and Kalimullah to life imprisonment while pronouncing the death sentence on two others in connection with the 1993 Mumbai blasts case, which had killed 257 and injured over 700 people.

The two given capital punishment by the court are Tahir Merchant and Feroz Khan. A fifth convict in the case – Riyaz Siddiqi has been jailed for 10 years.

Salem and Karimullah were also slapped a fine of Rs 2 lakh each by the court.

On June 16, 2017 Judge G A Sanap had convicted Abu Salem, Mustafa Dossa, Karimullah Khan, Firoz Abdul Rashid Khan, Riyaz Siddiqui and Tahir Merchant for their role in the blasts conspiracy while another accused Abdul Kayuum was acquitted. However, Dossa died on June 28, just 12 days after the verdict.

All the accused were facing multiple charges like criminal conspiracy, waging war against the government and murder of people.

Salem, who was accused of transporting weapons from Gujarat to Mumbai, was arrested in Portugal in 2002. However, a number of other accused in the case, including India’s most wanted terrorist Dawood Ibrahim, remain on the run.

On March 12, 1993, a series of 13 blasts in quick succession ripped through various locations in India’s financial capital killing 257 innocent people and injuring over 700.