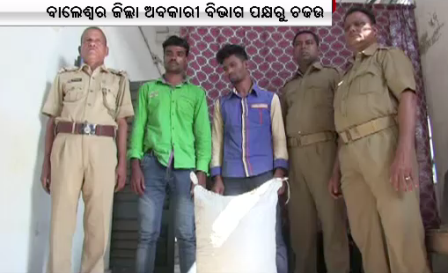 Balasore: In a crackdown on illicit drug trading in the district, Excise sleuths arrested two persons from Balasore bus stand today, and seized 18 kg ganja from their possession.

The arrested duo have been identified as Azhar Ul Lashkar and Farooq Hussein Sheikh.

Getting a tip-off on an ongoing ganja consignment through Balasore bus stand, a team of Balasore Excise unit headed by IIC KS Tiwari raided the spot, this morning. During the raid, the officials found a huge cache of ganja packets which had just been received from a bus from neighbouring West Bengal. The officials immediately seized them and arrested two persons from the spot.

Informing on the raid, the Excise IIC said the cost of seized ganja would worth over Rs 1 lakh.

“The arrested duo was transporting ganja from Digha area of neighbouring state West Bengal. A case has been lodged against them under NDPS Act and they would be forwarded to court today,” said Tiwari.