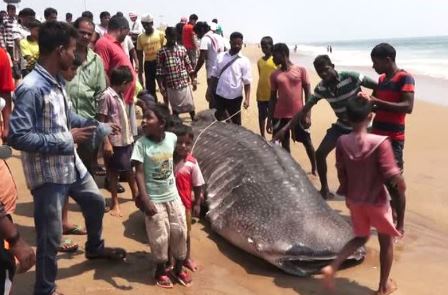 Earlier, dead whales were noticed on the sea beach many times, but the shark carcass was found today for the first time.

According to reports, some fishermen first noticed the dead sea mammal this morning and brought the carcass to the shore.

Though the exact reason behind the death of the shark is yet to be known, it is suspected that the mammal might have died after being hit by either a ship or a vessel in the deep sea and was washed ashore due to heavy current of the sea.

Forest officials and Sea Beach police, after getting information from the fishermen, reached the spot and recovered the carcass of the marine mammal. The dead sea creature will be buried after autopsy.