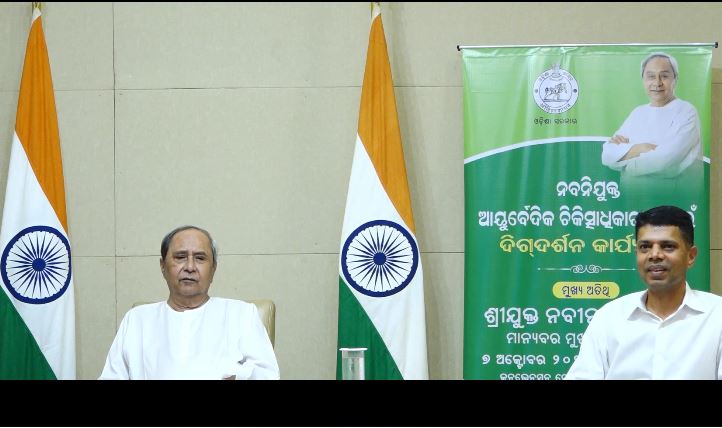 The Chief Minister said that Ayurveda is an age-old knowledge of life science that has been traditionally helping millions of people in India in maintaining good health and controlling disease. Now this knowledge, along with modern healthcare system, has been revived with structured studies to help society with more effectiveness, he added.

Welcoming the new medical officers to the healthcare system of the state, he asked them to follow 5T initiative to boost our transformative journey in healthcare. He said that the initiative applies the elements of Teamwork, Transparency, Technology and Time leading to Transformation.

Speaking that “Sustha Odisha, Sukhi Odisha” has been the guiding principle of his government in healthcare’ he said ‘Every Life Matters.’ He said, he has been emphasizing on this core value which every person in our healthcare system should follow.

Speaking on the state’s commitment to provide universal access to quality healthcare services and bring down the out-of-pocket expenses of the people, he said that the size of the budget of the Health Department is increasing over the years. Our healthcare budget estimate has been increased to over Rs. 12 thousand Crore in the current financial year which is almost double what it was three years ago. It is more than six percent of the State Plan, he added.

He hoped that joining of such a large number of Ayurvedic Medical Officers would improve the healthcare support system and result in greater satisfaction of the people.

Speaking on the occasion, Health & Family Welfare Minister Shri Naba Das said that the CM has been in a mission to strengthen state health infrastructure that has been reflected in Covid management, Oxygen supply, opening up of new medical colleges and appointment of doctors and paramedical persons.

Chief Secretary Suresh Mohapatra said the government is filling up all vacancies in war footing. He said the CM has directed that the healthcare system should reach all houses of the state.

Honda celebrates 25 years of Honda City in India, Check some highlights of the popular sedan