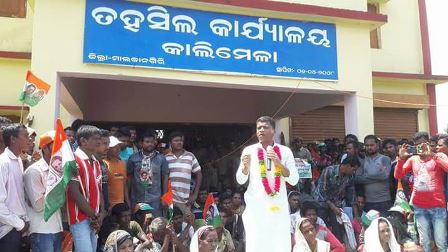 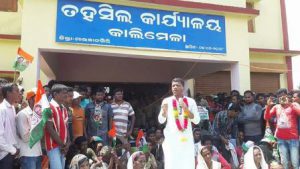 Malkangiri: Normal life was crippled across Kalimela Tehsil of Malkangiri district since the morning on Tuesday due to a 12-hour bandh call given by the Congress party protesting against the rampant corruption in the Tehsil office.

Earlier in the morning, bandh supporters were seen staging road blockade at several places in the Tehsil by burning tyres and keeping boulders on the road bringing vehicular traffic to a grinding halt along the Kalimela-Motu-Padia route. Commuters suffered a tough time during the bandh.

Congress is demanding the immediate transfer of the graft-tainted Tehsildar and a clerk in the tehsil. It also wants issuance of caste certificate, residential certificate and land records to the locals without delay.

“Over sixty percent people, who have been staying in the forest area, have not received land patta in Malkangiri district under the Forest Rights Act (FRA). As many as 4407 applications requesting to get 4 decimal of land each under FRA are pending in Kalimela Tehsil alone, and the total list of applicants in all the seven blocks in the district can be imagined”, Pradeep Majhi said while talking to Kalinga TV today.

“ More significantly, over 2000 SC/ST school students under Kalimela Tehsil have been forced to leave the hostel run by the SC/ST Department as they couldn’t produce their caste /income/resident certificate due to the negligence of  Kalimela Tehsil office”, Majhi complained.

” Since the tribal people don’t possess land patta, they are not getting Rasan Card, BPL card etc and they have been deprived to get benefit from various government schemes such as rice and wheat from PDS scheme” , he said.