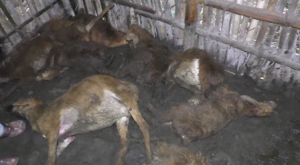 Jagatsinghpur: Adding to the fear of the mysterious animal attack which started from Niali before spreading to other parts of the state, 11 more sheep were found dead in the cattle shed of a man in Rayankpatna village in Jagatsinghpur district on Wednesday night. The incident left people in a state of panic as the same cattle shed had witnessed the killing of 12 sheep earlier this month.

According to reports, the mysterious animal attack came to fore today morning when Pratap Kumar Das, a resident of Rayankpatna village near Alipingala in Jagatsinghpur district, checked his cattle shed and found dead bodies of 11 sheep in a pool of blood with deep injury marks on their bodies. Two sheep were also found grievously injured. The injury marks on their necks and stomach bore striking resemblance to injuries seen in the earlier cases.

“In view of the fact that sheep killings had occurred in the village earlier, I checked my cattle shed at around 2 am last night. Everything was fine inside the cattle shed till then. But it was only in the morning that I found 13 of my sheep killed inside the cattle shed,” informed Pratap. “I was earlier having a total of 40 sheep in the cattle shed but lost 12 of them in the earlier attack by the mysterious animal. Today, I am left with only 4 to 5,” he added.

When queried if he had seen the killer animal, Pratap said he had once spotted a jackal-like creature running away in the dark but could not determine for sure what it was.

Notably, a team of forest officials visited the village earlier in the month but failed to catch any wild animal involved in the attacks on sheep.