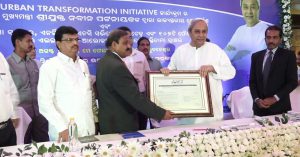 H&UD department and ESSL will together invest around Rs. 75 Crore for this purpose, while the latter will take responsibility of maintaining the LED street lights for the next seven years.

The joint initiative will help the state to achieve overall energy saving to the tune of nearly 35.97 million KW annually. It will translate into a total cost savings of about Rs 26.97 Crores per annum.

The initiative of the state government follows Prime Minister Narendra Modi’s pledge of “Wholehearted commitment towards energy conservation” across the country.

Housing & Urban Development Minister Niranjan Pujari , Commissioner-cum-Secretary  of H&UD  G. Mathivathanan and other senior bureaucrats were present on the occasion.