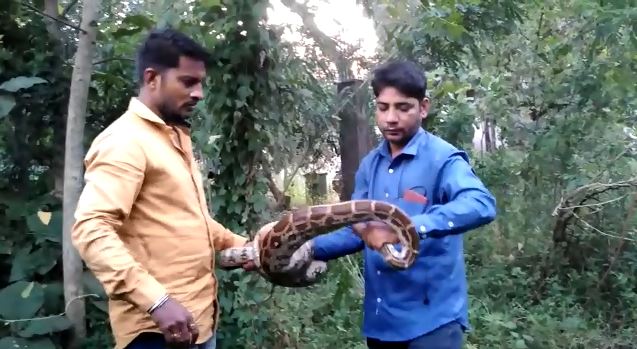 Balangir: A 10 feet long python was rescued from Balangir district of Odisha on Monday. The huge snake was witnessed near P R High School premises in Gandhi Nagar pada area of Balangir town by some locals following which the snake helpline team was called who rescued the reptile.

As per reports, a few people saw a large snake that had coiled up in a big tree near PR High School in front of Mahadev temple in Balangir town. The reptile did not harm anyone. Later, snake helpline team members were called to rescue the snake.

Within no time snake helpline members Sanju Mishra and Kanha Satpathy reached the spot and rescued the 10-feet-long python. Later they handed it over to the Forest department officials.

Since today was Monday and the snake was rescued from near a Lord Shiva temple, some people thought it as a divine symbol.

Want To Know Who Has Blocked You On WhatsApp? Here’s How You Can Find Out Easily