10 bodies consigned to flames together in Sambalpur village 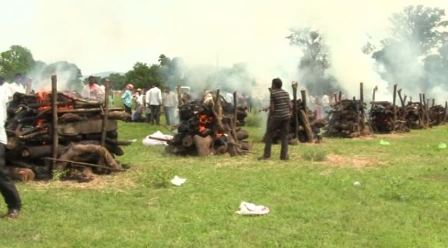 Sambalpur: The bodies of the 10 persons, who had lost their lives in a severe road accident on NH 55 near Bhawanipalli under Jujumura police limits in the district yesterday, were consigned to flames together at Paramanpur village amid tears and wailing on Tuesday.

The grief-stricken villagers took the bodies of the deceased to the cremationy ground for a mass funeral in a procession. Locals said that they had seen such incident only in films or the news, but now had to witness it first hand.

“We had heard, read and seen about such heart-rending incidents only in the media. This is the first time we are witnessing such a dreadful incident in our locality. Though the deceased are not our blood relatives, they were our good neighbours. It is very sad to see so many people consigned to the same flame at same place and time,” a woman of the village said amid sobs.

“This is the saddest moment for our village as 10 people were killed on the same day due to the road accident yesterday. The entire villager is mourning the death of their co-villagers. We find no words to express how sad we are. Though the compensation declared by the state government cannot replace the valuable lives of the deceased, thanks to the state government for the ex-gratia which would definitely help the kin of the deceased in one way or the other,” said Debendra Pradhan, a villager.

BJP leader and former Minister Jayanarayan Mishra, who attending the last rites, said, “I cannot express my feelings in words. It is a great loss not only for the village alone but for entire Sambalpur district that so many people dying in one accident. It is true that life and death depends on God.  May he give solace and strength to the bereaved family of the deceased!”

While 10 persons were killed in the road mishap, four others severely injured, including two minors, are still under medication at the Veer Surendra Sai Institute of Medical Sciences and Research (VIMSAR) in Burla.