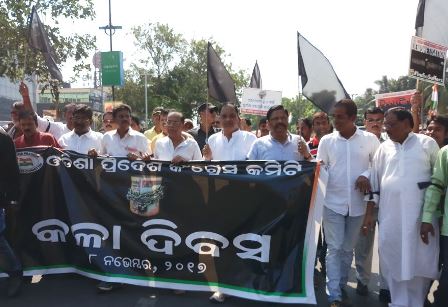 Bhubaneswar: Various political organisations and civil society outfits on Wednesday observed ‘Black Day’ here in the State capital, as a mark of protest against one year of demonetisation of 500 and 1000 rupee notes.

On November 8, 2016, Prime Minister Narendra Modi had announced ban on Rs 500 and Rs 1000 of banknotes, leading to widespread criticism.

The members of Trinamool Congress burnt effigy of the Prime Minister and raised slogans against the NDA Government.

“The farmers are committing suicides, youth have no employment. PM does ‘Mann ki Baat’ not ‘Aam Aadmi ki Baat’. The demonetisation move was a big failure. Therefore, the AAP is protesting the measures,” Nishikanta Mohapatra, Convenor, Odisha AAP.

The Odisha unit of Congress held a protest march from Congress Bhawan to RBI. Many senior leaders of the party including OPCC President Prasad Harichandan and hundreds of party workers took part in the protest march.

“BJP had claimed that demonetization will end terrorism and the black money stashed abroad would return to the country. Besides, they (BJP) had said that the move will reduce corruption. However, nothing of that sort happened, rather many people also died due to demonetization.  Demonetisation was the greatest failure in Indian history,” said senior Congress leader Suresh Kumar Routray.

“Modi government had said post demonetisation, corruption will end, terrorism will vanish and Naxalism will die out. Did anything happen? The Prime Minister speaks lies only, ” Congress’ Odisha  In charge BK Hariprasad said.
AAPBlack DayCivil societiesCongressCongress BhawandemonetizationOdishaPolitical parties
0 1,660
Share
You might also like
State