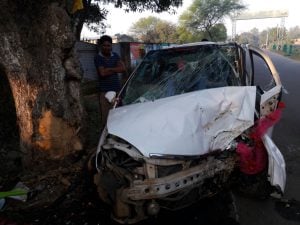 Balangir: A youth was killed at Kantabanji Gate on Muribahal-Kantabanji road in the district last night after a car he was travelling in smacked into a roadside tree.

The deceased has been identified as Khamari Bae of Salandi village under Belpada panchayat of Balangir district.

Khamari was returning to his village after attending a marriage party in a nearby village late in the night when the mishap took place. Khamari lost control over the wheels of the Tata Indica car which he was driving ending up in hitting a roadside tree.

While the victim was rushed to Kantabanji Hospital by local police in a critical condition, he died under treatment later in the night.