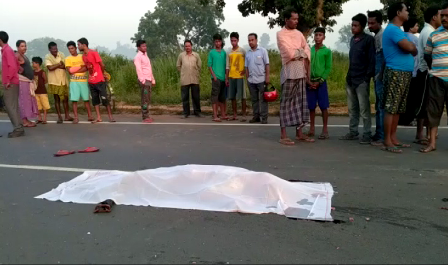 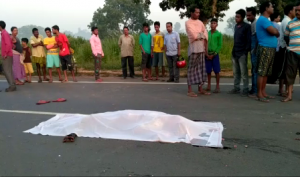 Jharsuguda: One person was killed and two others sustained critical injuries as an unidentified heavy vehicle struck morning-walkers at Kurnipada on NH 49 under Belphar Police limits here on Monday.

While the deceased and injured have not been identified so far, locals staged a road blockade on the NH following the accident demanding compensation to the victims’ kin.

The trio was on morning walk when the mishap took place. An unidentified heavy vehicle heading towards neighboring Chhattisgarh mowed them down from rear near Kurnipada Square and fled away.

The injured duo were immediately rushed to the Belpahar Hospital in critical condition by some onlookers. later, the locals staged a blockade on the road over the mishap.

Belpahar Police reached the spot and seized the dead body at around 10am. It also managed to put an end the road blockade here.