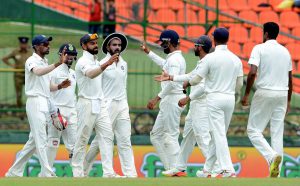 Kandy: India registered their first ever overseas whitewash in Test cricket, beating Sri Lanka in the third and final Test by an innings and 171 runs at the Pallekele International Cricket Stadium here on Monday.

However, skipper Dinesh Chandimal (36), Angelo Mathews (35), and N Dickwella  (41) fought to resist the India bowling attack for a while; but it was not enough. The hosts ended up 171 runs behind despite their efforts.

Earlier, the visitors enforced the follow on the hosts after they were bundled out for a paltry 135 runs in the first innings in reply to India’s massive first inning score of 487 runs.

With this victory, Virat Kohli became the first Indian captain to sweep a Test series away from home. India won the Test series 3-0.