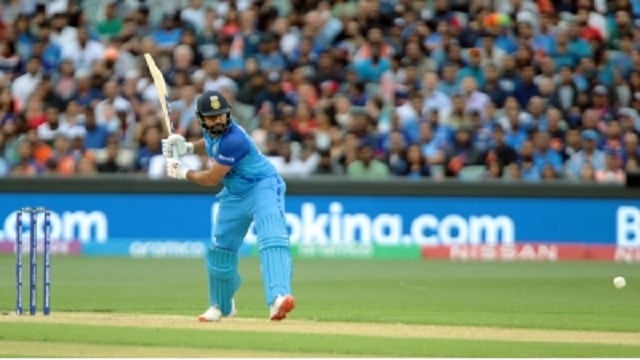 Adelaide:  Half-centuries from Hardik Pandya and Virat Kohli powered India to a challenging 168/6 against England in the second semifinal of the Mens T20 World Cup at the Adelaide Oval on Thursday.

England bowled excellently till the 15th over to deny India scoring opportunities towards the short square boundaries and got them to play more towards the longer side of the ground. While Chris Jordan picked 3/43 on his England comeback, leg-spinner Adil Rashid and pacer Chris Woakes were outstanding in their tight spells while taking a wicket each.

Pushed into batting first on a used pitch, K.L Rahul opened the innings by sending a short and wide delivery from Ben Stokes behind point for four. But Woakes found his outer edge along with some extra bounce in the second over to give a simple catch behind to the keeper.

Sam Curran had Kohli nearly caught at first slip apart from the left-arm pacer beating him on the previous ball. But the right-hander got off the mark with a stylish lofted drive off Woakes for six in the fourth over.

Rohit Sharma brushed off his cagey start by uppishly flicking Curran over mid-wicket and then pulling over the same region to collect back-to-back fours. He went on to sweep Rashid over square leg for his third four of power-play before Kohli used his wrists to loft over Liam L’vingstone’s head for another boundary.

After lofting Jordan over extra cover for four in the ninth over, Rohit tried to pull off the pacer but mistimed the ball to a diving wide long-on. Suryakumar Yadav got going by swivelling Stokes for six over fine leg and lofted over off-side for four more.

But he failed to get the connection on a slower leg-break outside the off-stump off Rashid and was caught at deep-point. Kohli took fours off Woakes, Livingstone and Jordan while Pandya also hit a four off the spinner, signalling that India were looking to shift gears.

On Curran’s first ball in the 17th over, Pandya cut a short one in front of square for six and against Jordan in the 18th over, he pulled and whipped over the short square boundary for back-to-back sixes.

With a brace through cover, Kohli got his fifty in 40 balls. But Jordan had the last laugh, ending the over by having Kohli slice a wide yorker to short third man. After Rishabh Pant cut Curran over backward point for four in the 19th over, Pandya expertly steered him through the same region for another four.

Pant running himself out to get Pandya on strike in the final over worked well as the right-hander thumped Jordan for six over long-on and pulled through deep mid-wicket for four before stepping on his stumps to be out hit-wicket on the final ball.