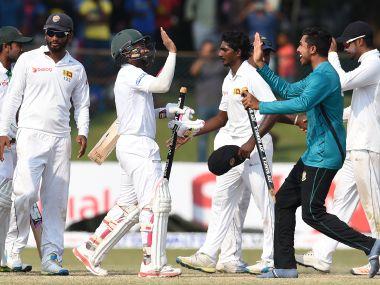 And so it happened as if it was meant to be – Bangladesh’s 100th Test match ended in smiles, hugs, delight and victory for a team who has over the years been the laughing stock and whipping boys of international cricket. Perhaps the fact that it was their 100th Test match inspired the Bangladeshis to turn in one of their best performances ever in international cricket.

Bangladesh’s previous record against Sri Lanka in Tests was nothing short of abysmal with fifteen defeats and two draws before their remarkable four wicket win in Colombo, on Sunday. Ahead of the series, very few people gave them a chance against an upbeat Sri Lankan team on their home shores. The series was expected to be a comfortable 2-0 win for the Sri Lankans but this Bangladesh team is made of sterner stuff than their predecessors and showed resilience, grit and determination to bounce back after a loss in the first Test and level the series.

After Sri Lanka scoring 338 in their first innings, the story of the match was expected to go a familiar way, with Bangladesh fighting hard in their first innings, being competitive, but then capitulating in the latter stages of the match. However, a first innings score of 467 built around the ever-reliable Shakib Al Hasan’s 116 and supported well by the lower-middle order, Bangladesh found themselves in control of the match with Sri Lanka regularly losing wickets despite an excellent century from Karunaratne and vital lower order contributions from Dilruwan Perera and Suranga Lakmal.

With 191 to win in the fourth innings, all eyes were on the visitors and at 22 for 2 it all seemed to be heading a familiar way with heartache for Mushfiqur Rahim’s team. Once again it seemed to be a case of so near, yet so far for Bangladesh. But then, up stepped the battle-hardened and aggressive opening batsman Tamim Iqbal and youngster Sabbir Rahman, playing only his sixth Test match, to forge a crucial and match-turning century partnership. Despite a few scares on their way Bangladesh held their nerve to seal a vital four wicket win.