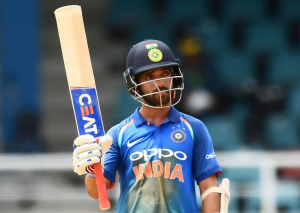 Port of Spain: Ajinkya Rahane’s magnificent hundred and flawless performance by the bowlers took India to a 105-run victory in the second ODI against the West Indies at Port of Spain on Sunday night.

Set to chase 310 runs, the hosts could manage only 205 for 6 in the stipulated overs, in a rain affected match that was reduced to 43 overs a side.

Earlier, sent in to bat, India posted a mammoth total of 310 for 5. Opener Ajinkya was the top scorer with 103 off 104 balls, which was his third ODI hundred. He smashed two sixes and ten fours in his brilliant knock.The other notable scorers were Captain Virat Kohli who made 87 in just 66 balls, and Shikhar Dhawan who was out for 63.

India is now 1-0 up in the five-match ODI series. The first ODI was washed out due to persistent rains.