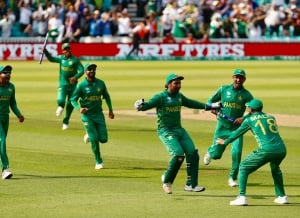 London: Pakistan stunned the cricket pundits all over the world with brilliant display of cricket, mighty Team India disappointed their fans and faltered at the last hurdle to concede ICC Champions Trophy 2017 title on a platter.

When India won the toss, everyone thought game would belong to Kohli & Co. as expected, Kohli opted to bowl. But, the wicket was fresh and everyone misread it. Rather, it was a good toss to loss for Pakistan.

Pakistan made a mockery of Indian bowling attack and posted 338/4 in 50 overs. Azhar Ali made 59, while Fakhar Zaman hit his maiden ODI hundred at 114 off 106 balls with 12 boundaries and 3 sixes. Babar Azam 46 and Mohammad Hafeez 57* were the other contributors.

Although the target was huge, Indian batsmen were expected to put up a good fight. However, their strong batting lineup collapsed like a pack of cards and they bowled out for 158 in 30.3 overs.

They were in danger of bundling out for below hundred, but Hardik Pandya played a brilliant innings of 76 off 43 balls with 4 boundaries and 6 sixes to take the score past 150. Mohammad Amir 3/16, Hasan Ali 3/19 and Shadab Khan 2/70 were the top wicket takers.