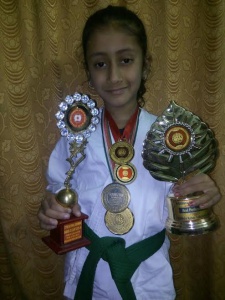 Ludhiana: Odia Girl Akankshya Mishra will represent India in the junior category of World Kumite Karate Championship to be held in Thailand on October 6 to 8. She will take part in the female weight category of 20 kg to 25 kg in the international competition.

Born to Nilima Mishra and Ajay Kumar Mishra at Banei in Sundargarh district of Odisha, Akankshya, is now staying with her parents in Ludhiana city of Punjab. She is a student of in standard V at Guru Nanak Model Senior Secondary School, Dholewal.

Talking to Kalinga TV, her proud father Ajay said, “Akankshya started practicing karate at the age of seven under the guidance of Coach Pankaj Sahani at Asihara Karate Institution in Ludhiana. She has already won ten trophies, including Punjab state Championship, Inter-state Championship and National Championship.”

“She is working hard for her maiden international competition. May Lord Jagannath bless her to win the championship and bring glory to Odisha and the country,” he added.