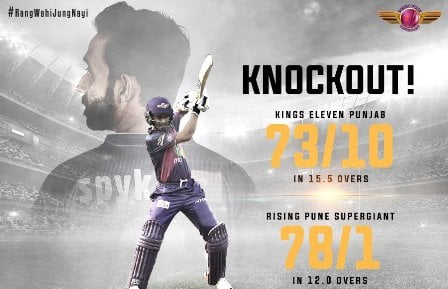 The Mumbai Indians finished at the top of points table with 20 points (10 wins from 14 matches) in IPL 10, while the Rising Pune Supregiant joined them in the playoffs as the second team after a 9-wicket victory over Kings XI Punjab. RPS won 9 matches in total.

The Sunrisers Hyderabad (17 pts) and Kolkata Knight Riders (16 pts) finished third and fourth in the points table to qualify for the eliminator.

In the first match last night, KXIP bowled out for a paltry 73 in 15.5 overs against RPS. Shardul Thakur took three wickets, while Jaydev Unadkat, Adam Zampa and Daniel Christian took two wickets each.

RPS did not have any difficulty to chase the target. They reached 78/1 in 12 overs to win the match by 9 wickets. Ajinkya Rahane (34*) and Rahul Tripathi 28 were the top scorers. Unadkat was adjudged ‘Player of the Match’ for his superb bowling figure of 3-1-12-2.

Women’s T20: Velocity qualify for final despite loss against Trailblazers