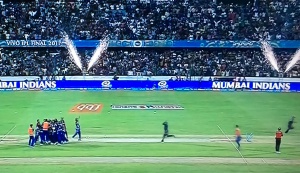 Hyderabad: In a nail biting finish tonight, the mighty Mumbai Indians pulled off a sensational one-run win over a spirited Rising Pune Supergiant to win the IPL 10 title – their 3rd tournament win. The RPS were heartbroken to lose the match in a dramatic last over.

Earlier, Mumbai Indians won the toss and elected to bat first. They lost Parthiv Patel and Lendl Simmons for just 8 runs on board. They could manage just 129/8 in 20 overs. Krunal Pandya was the top scorer with 47. For RPS, Unadkat, Zampa and Christian took two wickets each. 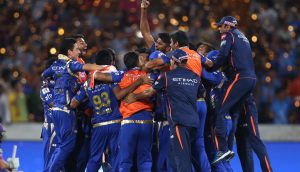 Chasing a victory target of 130, RPS lost Rahul Tripathi early. But, Rahane 44 and Steven Smith 51 played the anchors’ roles. They almost took away the match, but for the last over, which saw the fall of Tiwary, Smith and Christian.

RPS managed to score 128/6 in 20 overs and lost the match by one run. Mitchell Johnson was the star with three wickets, while Bumrah took two wickets.

Rising Pune Supergiant got the runners-up cheque of Rs 10 Crore. Mumbai Indians received the winner’s cheque of Rs 15 Crore along with the trophy.