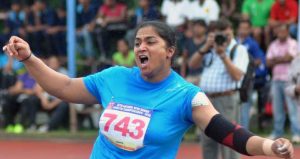 New Delhi: The Athletics Federation of India (AFI) on Thursday provisionally suspended ace Indian shot putter Manpreet Kaur after she tested positive for a banned substance for the second time in the last couple of days.

Manpreet had failed the dope test conducted by the National Anti-Doping Agency (NADA) during the June 1-4 Federation Cup in Patiala. Her urine sample ‘A’ collected during the first leg of the Asian Grand Prix at Jinhua, China, on April 24 has also been found to have dimethylbutylamine, a banned substance, in it.

Dimethylbutylamine is structurally related to methylhexanamine, a stimulant which was found to have been used by several sportspersons just before the 2010 Delhi Commonwealth Games.

The 27-year-old shot putter, who won the gold at the Asian Athletics Championships in Bhubaneswar earlier this month, will now miss the World Championships in London starting from August 5 to 13, 2017.