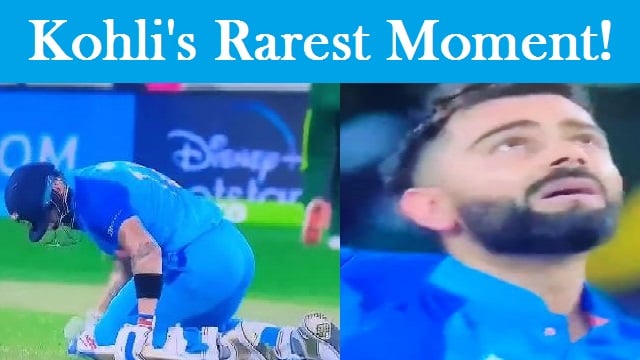 There is no doubt that two arch-rivals India and Pakistan played out an unbelievable match in a thrilling Super 12 match of Men’s T20 World Cup in front of 90,293 fans at Melbourne Cricket Ground on Sunday.

After bundling Pakistan 159/8 in 20 overs, India, who opted to bowl first after winning the toss, started their innings very poorly. They lost their first four wickets (KL Rahul, Rohit Sharma, Suryakumar Yadav and Axar Patel) in just 31 runs from 6.1 overs. At some point of time, it was predicted that Pakistan would win the match for sure.

However, Virat Kohli and Hardik Pandya played brilliant innings and collected 113 runs during their partnership.

T20 World Cup: Rohit and my understanding and vision for the…

Virat Kohli slammed an unbeaten 82 off just 52 balls and powered India to an incredible victory. As soon as India achieved the target, Kohli punched the ground and tears were in his eyes. This video of Virat is now going viral on social media platforms after it was shared on the Twitter page named Shilpa Bodkhe – प्रा.शिल्पा बोडखे.

Winning Moment of the Match !!

Rushdie lost sight in an eye, use of one hand after Aug attack