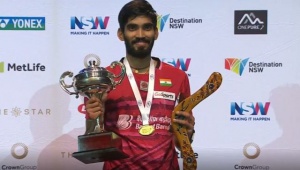 In the summit clash, Srikanth outplayed his Chinese opponent with straight games 22-20, and 21-16 to clinch his maiden Australian Open Super Series.

For Srikanth, it is his second trophy in this season and fourth overall. He had won the Indonesian Open last week.