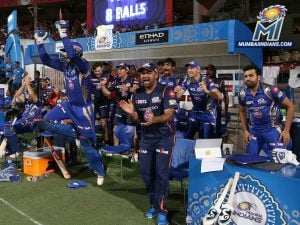 The Mumbai Indians recovered from the shocking early losses to register a thrilling win over the Royal Challengers Bangalore in an IPL match in Bengaluru this evening.

Chasing a victory target of 143, Mumbai Indians lost four wickets for just 7 runs on board, as Samuel Badree wrecked havoc by claiming all those wickets.

However, Kieron Pollard (70) along with Krunal Pandya (37*) prevented any further loss and helped the team to reach the target in 18.5 overs by losing 6 wickets.

Kieron Pollard was declared ‘Man of the Match’.