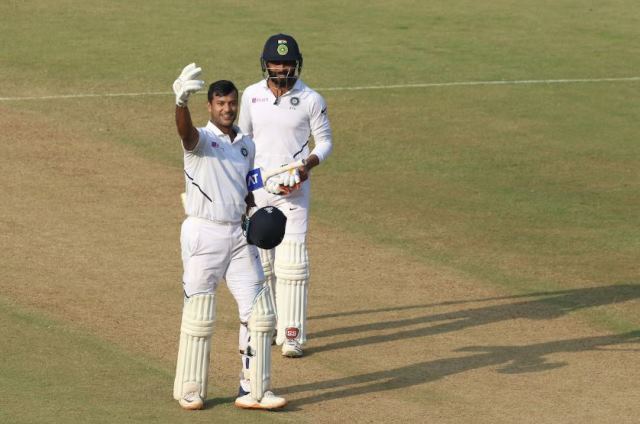 Indore: Mayank Agarwal headlined India’s domination with a classy double hundred, his second, to help the team post a mammoth 493/6 against a hapless Bangladesh side, at stumps on Day 2 of the first Test here on Friday. India now lead by 343 runs after Bangladesh were all out for 150 in the first innings.

At close of play, Jadeja and Umesh Yadav (25 batting), who once again hit three sixes to show his big-hitting prowess, were at the crease.

Besides Agarwal, Ajinkya Rahane (86), Cheteshwar Pujara (54) and Ravindra Jadeja (60 batting) scored half centuries as the Indian batters toyed with Bangladesh bowlers who lacked the acumen to stop them besides Abu Jayed who returned best figures of 4/108, his career-best.

Agarwal, who was dropped on 32 by Imrul Kayes off Abu Jayed late on the first day, perished for a career-best 243 from 330 balls, his marathon innings laced with 28 fours and eight sixes, to close the gap on Steve Smith who is the highest run-getter this year. Smith has 774 runs from seven innings while Agarwal has amasssed 740 in 10 innings.

The 28-year old hit off-spinner Mehidy Hasan for a massive six over wide long-on to reach the milestone and raised his bat in celebration towards the dressing room where skipper Virat Kohli rose to his feet in adulation.

Soon after, as he tried to up the ante by smashing a few more sixes, Agarwal departed as he was caught at deep mid-wicket by Abu Jayed off Mehidy who breathed a sigh of relief after being taken to the cleaners by the Karnataka batsman.

Agarwal took 304 balls to cross the double hundred mark. It was fitting that Agarwal got to his double ton off Mehidy whom he took a liking to and scored most runs off.

Agarwal had scored 215 on October 2 in Visakhapatnam against South Africa. He followed it up with a 108 in Pune against the same opposition.

Agarwal joined hands with India vice-captain Rahane for a 190-run stand for the fourth wicket which set the platform early on after Pujara and Kohli (0) got out early.

Overnight batsman Pujara was lured by Abu Jayed into a drive in the fourth over of the day with a delivery outside off that moved away slightly.

The ball took the outside edge and substitute fielder Saif Hassan did well to dive to his left and hold on at fourth slip. The second wicket stand between Pujara and Agarwal thus ended on 91.

Abu Jayed struck again for Bangladesh in the next with the all-important wicket of the Indian skipper. The umpire had initially not raised his finger for the LBW appeal, but Mominul Haque went for the review. Ball tracking showed that the delivery would have taken Kohli’s leg stump and the decision was reversed. Kohli was dismissed for a two-ball duck.

However, that was the last Indian wicket to fall in the first session with Rahane sticking on with Agarwal. In the process, Rahane became the 16th Indian to go past 4,000 Test runs. The pair expertly chipped away at the Bangladeshi bowlers as India surpassed their opponents’ first innings total.

From then on, it was Agarwal all the way as he milked the bowlers all around the park and was a treat to watch. Rahane too looked good for a hundred before he was caught by Taijul Islam off Abu Jayed who grabbed his fourth wicket.

Jadeja joined Agarwal and the pair stitched a 123-run partnership where both took turns to play aggressively and take on the tiring bowlers.

As the Bangladesh bowlers lost plot, the job became easier for him as he became more aggressive and displayed his full repertoire in front of the spectators who were thoroughly entertained.

After his dismissal, Jadeja took over to continue his good show with the bat as he got to his 50 in 72 balls. Stumper Wriddhiman Saha (12) was clean-bowled by Ebadat Hossain before Umesh gave the Indian dressing room a lot to cheer about with three sixes.