Indian sprinters get past first hurdle at Asians Athletics 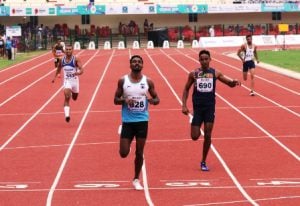 Bhubaneswar: The Asian Athletics Championships began on a high note for the Indians as sprinter Muhammed Anas, a national record holder in 400m, qualified for the semi-finals along with his compatriots Arokia Rajiv and Amoj Jacob.

Anas finished second in Heat 1 behind Sri Lanka’s Dilip Ruwan while Rajiv sailed through in first place in Heat 2 and Jacob secured first-place finish in Heat 3.

In Women’s events, Chitra PU qualified for the semi-finals from Heat 2 in the women’s 1500m, while Monika Chaudhary finished in fourth place in Heat 1. In the men’s 1500m event, Ajay Kumar Saroj competed in Heat 1 of the event and Siddharth Adhikary qualified from Heat 2 with a second-place finish.

The men’s high jump also got under way with China’s Asian Games silver medalist Zhang Guowei and others setting a modest qualification standard of 2.10m.

In the men’s decathlon that kick-started the proceedings today, Japan’s Kazuya Kawasaki took an early lead with the 100 m sprint leg of the event. India’s Abhishek Shetty was playing catch-up in a strong field that includes Asian Championships silver medalist Guo Qi from China.

In the evening session on Day 1, national record-holding discus thrower Vikas Gowda will hope to make it a hat-trick of Asian Championship titles after winning gold in Wuhan (2015) and Pune (2013). China’s Ding Bangchao, who cleared the bar at 5.70m in Jinan on May 18, will be at the centre of attention in the men’s pole vault final, with challenge coming from Japan’s Masaki Ejima and Husain Asim Al-Hizam of Saudi Arabia.

The 5000 meter event will see both the men and women lining up for their respective finals while the women take the field in the javelin, shot put and long jump finals as well. The opening day will be spiced up with the heats of the men’s 100m, which includes the Asian record holder and defending champion Femi Seun Ogunode of Qatar, with national champion and local boy Amiya Kumar Mallick hoping to put up a strong show.