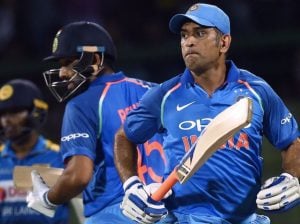 Team India produced a superb display of batting & bowling to win the ODI series with two matches to go. India now take an unassailable 3-0 lead in the five-match series. Despite the late crowd trouble, the match was finally completed.

In reply, India lost Dhawan & Kohli early. Lokesh Rahul and Kedar Jadhav did not last long either. At one stage, India slumped to 61/4. But, Rohit Sharma held the fort with full support from Dhoni.

India did not lose any other wicket and reached 218/4 in 45.1 overs. Rohit Sharma remained unbeaten on 124, while Dhoni remained not out on 67. Dananjaya took two wickets. Bumrah was declared ‘Player of the Match’.