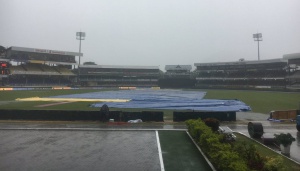 Port of Spain: The first cricket ODI of the five-match series between India and West Indies was called off due to persistent rain at Queen’s Park Oval in Port of Spain on Friday.

West Indies won the toss and decided to bowl first.

The Indian openers got off to a great start with Shikhar Dhawan scoring 87 and Ajinkya Rahane 62. The visitors were looking to post a big total on board but the rain cut their innings short at 39.2 overs, by which time the score was 199 for 3.

For the host team, J Holder, AS Joseph and D Bishoo got one wicket each.

The second match of the series will be played at this same venue on June 25.