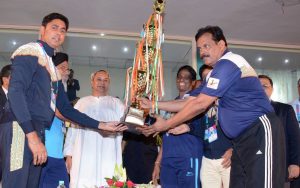 Bhubaneswar: India added 5 more medals on the concluding day to top the medal tally at Asian Athletics 2017 that came to an end with a spectacular closing ceremony at Kalinga Stadium, Bhubaneswar.

India finished at the top with 12 Gold, 5 Silver and 12 Bronze – total 29 medals, biggest ever medal haul by India in any Asian Athletics Meet. China finished second with 20 medals, including 8 Golds.

As Asia’s biggest track and field event came to a close at the Kalinga Stadium in Bhubaneswar on Sunday, it was marked by a memorable dance performance. Contrary to the event is just about a dazzling array of lights and sounds, Percept One conceptualized a closing ceremony that left a packed Kalinga Stadium and viewers around the world with a significant message of friendship.

The event was flagged off by Honourable Chief Minister of Odisha Shri Naveen Patnaik where he stated, “This Championship is now a landmark event in the India’s Sporting history and in years to come it has imprinted Odisha’s name all over the World of Sports. The event will be etched in memories of all the Indians because on the field heroics of the Athletes throughout the event.”

“In an extraordinary turn of event, India secured a Gold in the Men and Women Category of 400 m run and repeated the same feat in the 1500 m run as well. Manpreet Singh’s supremacy in the Womens Shot put and Sudha Singh’s sheer dominance in Womens Steeplechase will go down as one of the finest efforts in their respective categories.” 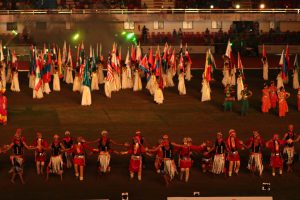 “Ama Odia Jhia Dutee Chand made the entire nation proud with her valiant effort on the track. These were accompanied by numerous champion performances by the participating nations as well which raised the bar of the competition. Also if Odisha gets an opportunity to hold the CommonWealth Games or the Asian games, we will be setting up satellite stadiums in Cuttack, Rourkela, and Sambalpur”, said the CM.

AFI President Mr. Adile Sumariwala stated that he is extremely impressed with the facilities at Kalinga Stadium in Bhubaneswar and hence will be trying to get the World Junior Athletic Championship to Odisha in 2019. 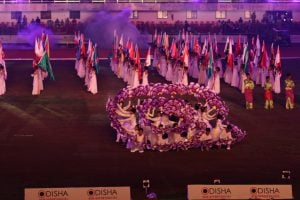 The act began with depicting local dance forms of 8 countries including Lavani & Bhangra of India. The act comprised of dance and light formations. The Zenith Dance group of Mumbai choreographed the entire act that also featured 250 students from the Kalinga Institute of Social Sciences (KISS).